Marsh & McLennan Companies, Inc. (NYSE: MMC – Get Rating) has earned an average rating of “Hold” from the twelve ratings firms that are covering the stock, Marketbeat Ratings reports. Two research analysts have rated the stock with a sell recommendation, four have assigned a hold recommendation and six have given a buy recommendation to the company. The average twelve-month target price among brokerages that have issued ratings on the stock in the last year is $ 173.90.

Marsh & McLennan Companies (NYSE: MMC – Get Rating) last released its quarterly earnings data on Thursday, April 21st. The financial services provider reported $ 2.30 EPS for the quarter, topping the consensus estimate of $ 2.13 by $ 0.17. Marsh & McLennan Companies had a return on equity of 31.17% and a net margin of 15.93%. The business had revenue of $ 5.55 billion for the quarter, compared to analyst estimates of $ 5.50 billion. During the same quarter in the prior year, the firm posted $ 1.99 EPS. The business’s quarterly revenue was up 9.2% compared to the same quarter last year. On average, equities research analysts forecast that Marsh & McLennan Companies will post 6.82 EPS for the current year.

The business also recently announced a quarterly dividend, which was paid on Friday, May 13th. Shareholders of record on Wednesday, April 6th were paid a $ 0.535 dividend. This represents a $ 2.14 dividend on an annualized basis and a dividend yield of 1.43%. The ex-dividend date was Tuesday, April 5th. Marsh & McLennan Companies’s dividend payout ratio (DPR) is presently 33.86%.

Marsh & McLennan Companies, Inc, a professional services company, provides advice and solutions to clients in the areas of risk, strategy, and people worldwide. It operates in two segments, Risk and Insurance Services, and Consulting. The Risk and Insurance Services segment offers risk management services, such as risk advice, risk transfer, and risk control and mitigation solutions, as well as insurance and reinsurance broking, catastrophe and financial modeling, and related advisory services; and insurance program management services. 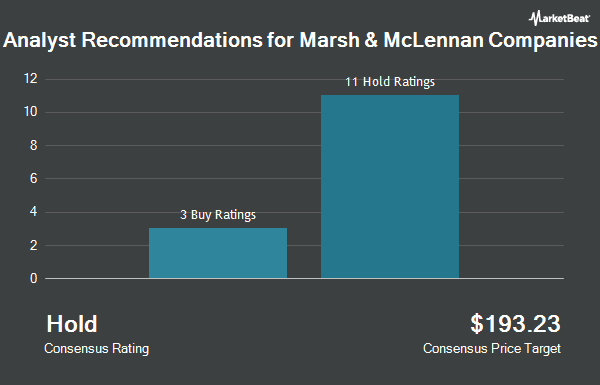