Norfolk Southern (NYSE:NSC – Get Rating) last released its earnings results on Wednesday, April 27th. The railroad operator reported $2.93 earnings per share for the quarter, beating the consensus estimate of $2.91 by $0.02. Norfolk Southern had a net margin of 26.58% and a return on equity of 21.95%. The firm had revenue of $2.92 billion during the quarter, compared to analyst estimates of $2.83 billion. During the same quarter in the previous year, the firm earned $2.66 earnings per share. The company’s revenue for the quarter was up 10.5% compared to the same quarter last year. As a group, analysts expect that Norfolk Southern will post 13.9 EPS for the current fiscal year.

Norfolk Southern announced that its Board of Directors has authorized a share buyback plan on Tuesday, March 29th that allows the company to repurchase $10.00 billion in shares. This repurchase authorization allows the railroad operator to repurchase up to 14.6% of its shares through open market purchases. Share repurchase plans are generally a sign that the company’s management believes its shares are undervalued.

The firm also recently declared a quarterly dividend, which was paid on Friday, May 20th. Shareholders of record on Friday, May 6th were issued a $1.24 dividend. This represents a $4.96 dividend on an annualized basis and a yield of 2.17%. The ex-dividend date was Thursday, May 5th. Norfolk Southern’s payout ratio is 40.03%.

In other Norfolk Southern news, CEO Alan H. Shaw sold 1,000 shares of the company’s stock in a transaction dated Wednesday, June 1st. The shares were sold at an average price of $241.84, for a total value of $241,840.00. Following the completion of the sale, the chief executive officer now directly owns 34,255 shares of the company’s stock, valued at approximately $8,284,229.20. The sale was disclosed in a filing with the Securities & Exchange Commission, which is available through this hyperlink. 0.31% of the stock is currently owned by corporate insiders.

About Norfolk Southern: (Get Rating) 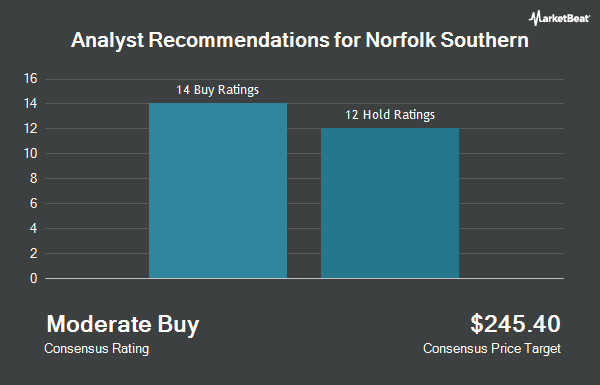