As Day 134 of the planned 3-4 excursion to Kiev comes to an end, let’s take a look at how things are going. For a quick look back, visit Putin’s War, Week 18. Snake Island, Prisoner Exchanges, Calculated Terror, and the War in Donbas.

Perhaps the biggest takeaway from the past week has been the degree to which the current international order has been placed under stress.

For the first time ever, the G20 meeting in Bali (of all places) concluded without a communique.

There is a report that Russian President Vladimir Putin has declared war on the current system.

In a meeting with Duma members yesterday, Putin 🇷🇺 said his war against 🇺🇦 is “only the beginning of a radical breakdown of the US-style world order” and a “transition from liberal-globalist American egocentrism.” For him, it is nothing less than a war for the world. pic.twitter.com/YRuvprg0Vg

Inside the EU, there is infighting because Lithuania is sticking to its guns and refusing to allow goods under EU sanction to cross its territory to the Russian enclave of Kaliningrad. The background is in Lithuania Enforces EU Sanctions on Kaliningrad and Putin’s Toadies Lose Their Minds. The Germans have been trying to convince Lithuania to ignore the sanctions violations, but the fond memories of sticking it in the eyes of both parties to the Molotov-Ribbentrop Pact seems to have gotten juices flowing.

At the same time, the governor of Kaliningrad is calling for something like the Danzig Corridor to be carved out of Lithuanian territory.

The Governor of Kaliningrad, Anton Alikhanov, now calls for the international community to negotiate between Russia and Lithuania for an extraterritorial rail-and-highway corridor to be built between Kaliningrad and Belarus.

He says Lithuania’s actions will have consequences. pic.twitter.com/8NgBYoyk4F

By the way, a parody site posted a story on Lithuania tearing up the railroad tracks between Russia and Kaliningrad, do not be sucked in by it. It is not real. Yet.

This is a parody account – its news are only imitating reality.
But this news of Lithuania dismantling rail leading to Kaliningrad got way too many likes and people reacting as “way to go” https://t.co/RdDVIF4qtM

Perhaps the greatest strategic event was the resignation of Boris Johnson (BREAKING: British Prime Minister Boris Johnson Resigns). Johnson has been the European leader in assisting Ukraine (Boris Johnson Pays Surprise Visit to Kiev and Volodymyr Zelensky as the World Wonders Where Is Joe Biden), and everyone will be watching who steps up to be the next Prime Minister. Do not underestimate the impact of the loss of a single leader in a coalition war. The sudden death of Tsarina Elizabeth, Frederick the Great’s implacable foe in 1762, and her replacement by the Teutonophile Tsar Peter III rescued Frederick from sure disaster.

This is a reminder of how the first 90-days of the Russian invasion of Ukraine looked.

This is the front line today.

HIMARS continues to be the big news. The Ukrainians have nine of the systems, and four more are on the way. In addition, they have at least three M-270 MLRS. Furthermore, today officials announced that Ukraine will receive the MGM-140 Army Tactical Missile System (ATACMS) in the next round of equipment deliveries. This missile is launched from the HIMARS / MLRS and has a range of about 190 miles. This system is showing signs of being a war-winner. Combined with counterbattery radar and electronic warfare assets, artillery, command and control, and logistics elements can be targeted throughout the battlespace.

For more than a month, a Russian field headquarters was frustratingly beyond the range of a Ukrainian unit’s Soviet-era artillery battery. That changed last week, when it got its Himars.
Great story by @stephenkalin https://t.co/36AIqGMY0U

A BBC map of Russian warehouses that were targeted from June 28-July 6, according to Ukrainian officials. The first footage of HIMARS being used in Ukraine was published on June 24. https://t.co/WusWwGCBDa pic.twitter.com/HrIvQr4LYE

Ukraine is also receiving advanced medium-altitude air defense systems. The first Norwegian Advanced Surface to Air Missile System (NASAMS) units arrived in Ukraine a few days ago. It is important to realize that the training of Ukrainian troops to use the new weapons system precedes any announcement of their transfer. When you hear a weapon has been approved for transfer to Ukraine, always assume that a trained crew is available.

As I posted in the last update, Russia seems to have adopted the bombardment of population centers as a tactic. Cruise missiles launched from Russian naval units in the Black Sea and strategic bombers regularly target Ukrainian cities far from the battlefield. The strikes do not seem to be aimed at anything in particular. It is assumed that this is video of NASAMS in action because a) it was known to have arrived and b) nothing like this has happened before.

On Tuesday morning, July 5, the Russian invaders launched a missile attack on the Dnipropetrovsk region. 7 missiles were fired, 6 of them shot down by Ukrainian air defense.
Video by @KpsZSU pic.twitter.com/G4TC6FeY15

Germany has begun training Ukrainian crews for the Gepard; an air defense gun system mounted on the Leopard main battle tank chassis. The Gepard is obsolescent but has excellent radar and 35mm ammunition designed to engage aircraft. Unmanned Aerial Vehicles (UAVs) used for adjusting artillery fire are the bane of both sides, and the Gepard would provide a means of engaging Russian UAVs before those vehicles could spot critical targets.

Ukraine continues to make small advances on this front. 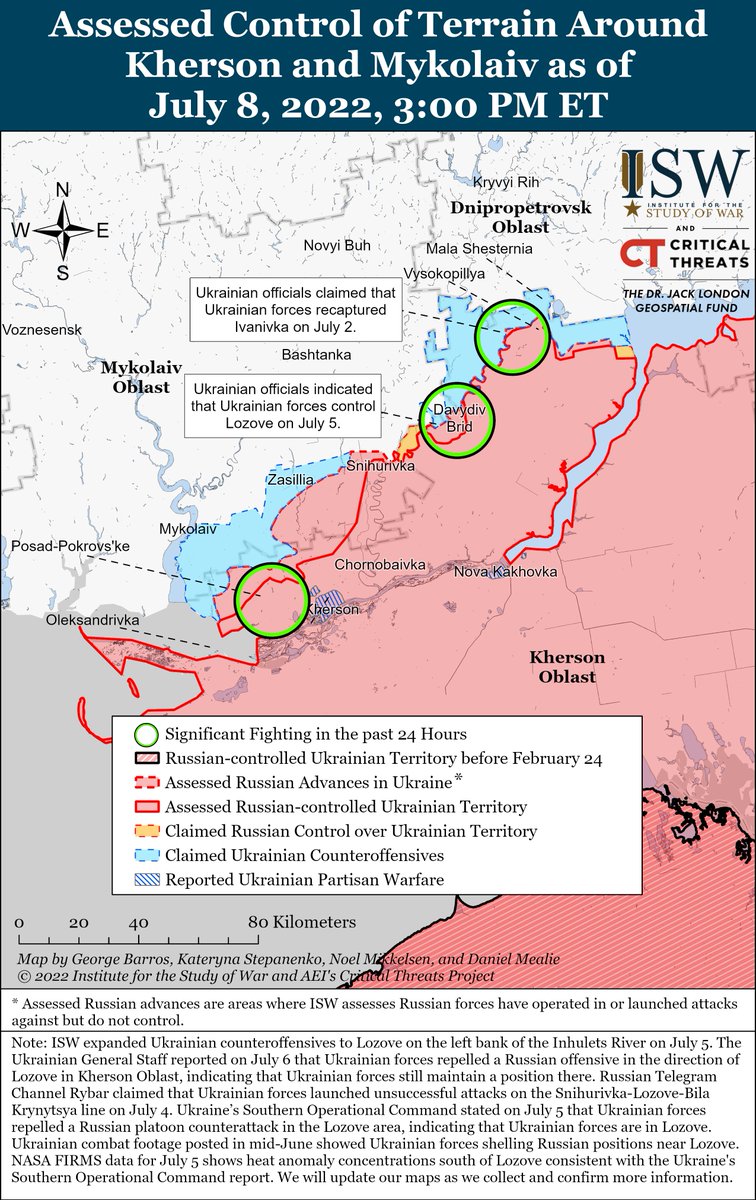 The Ukrainian Army has called for all civilians to evacuate Kherson before it is attacked. My assessment has not changed. I can not imagine the Ukrainians getting involved in a meat grinder in Kherson. I think their objective is the line of communication (LOC) between Kherson and Melitopol. Severing that the LOC would force the evacuation of all Russian troops to the northwest of Kherson. Were I calling the shots, I’d have my eye on Nova Kakhovka. That city sits astride the LOC, and it controls the canal providing potable water to Crimea.

Last week I noted that Ukrainian artillery had forced the Russians to evacuate Snake Island. This week the Ukrainian flag flies there. I’m not sure if it is occupied right now, but that is inevitable. An anti-ship missile and anti-aircraft battery would make the island impervious to Russian attack. Anti-ship missiles on Snake Island put a large section of the Black Sea, including approaches to the Sevastopol naval base in Crimea, off-limits to Russian ships.

This front has been static outside of some skirmishing. I still hold the view that this is a backwater of the war. 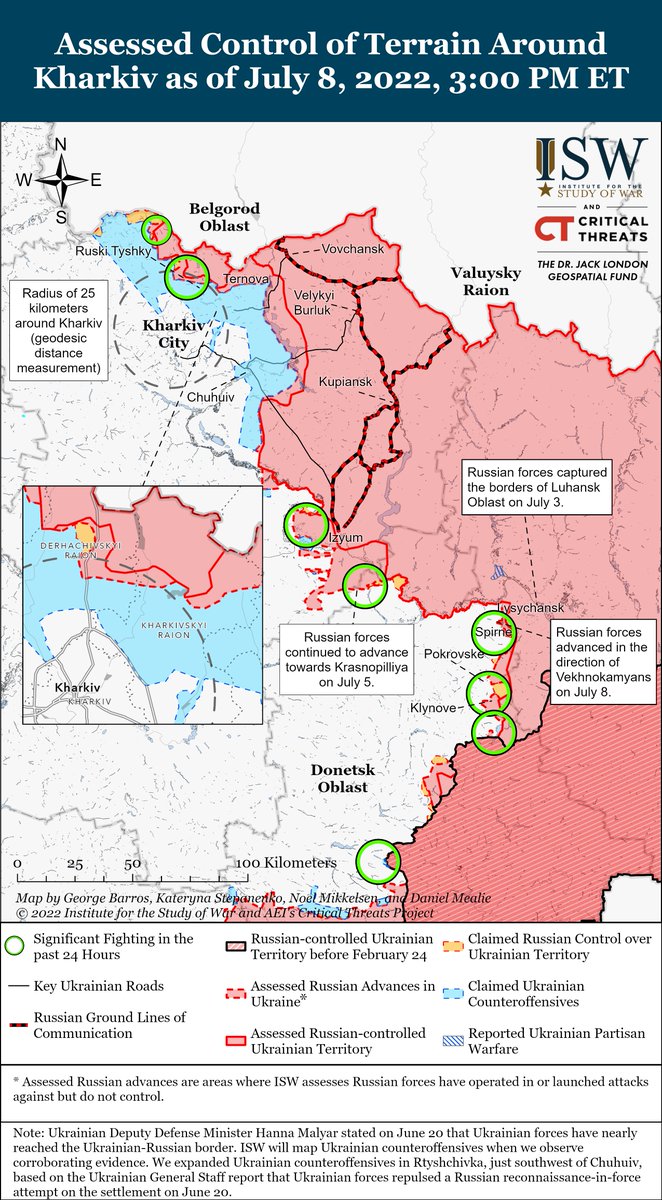 In the last week, the Russian army has succeeded in occupying the historic Oblast of Luhansk, the northernmost of the Donbas oblasts or provinces. 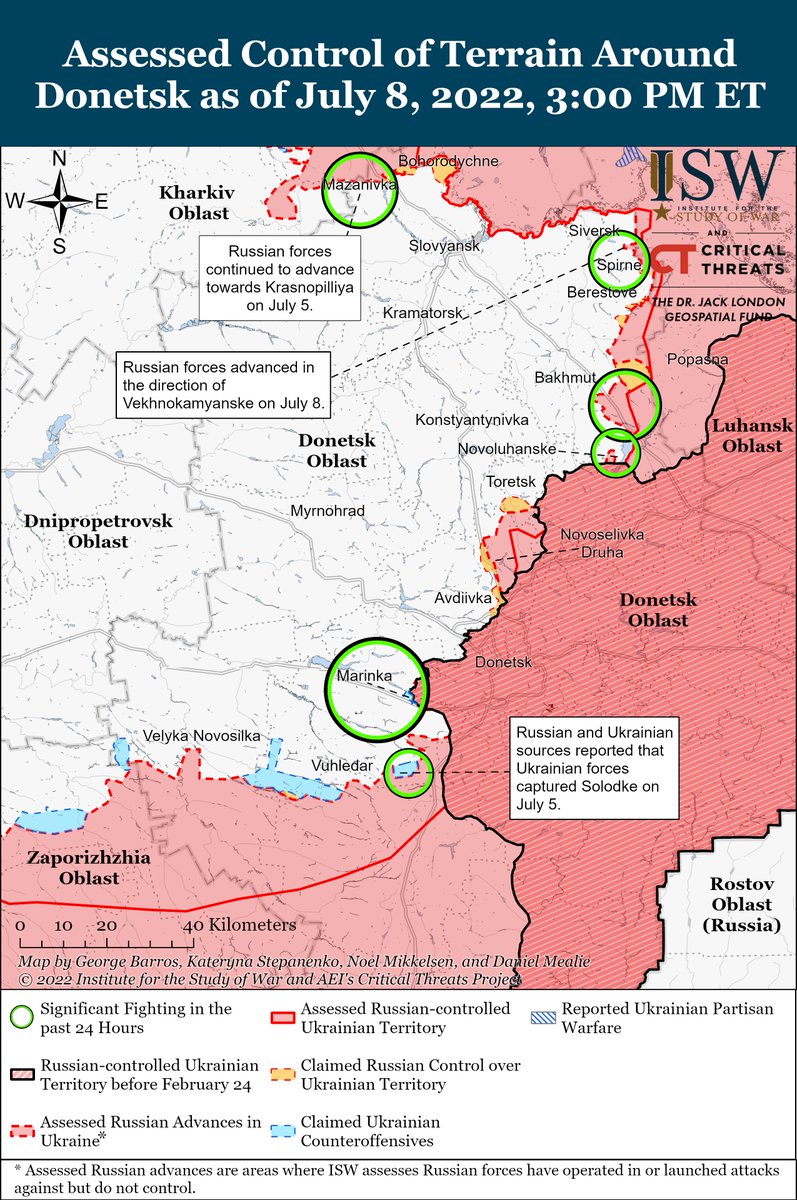 The Russians have not claimed any new territorial gains in the last 24 hours and seem to be at an “operational pause,” having reached the Clausewitzian culminating point.

President Vladimir Putin of Russia ordered the troops involved in capturing Lysychansk and the rest of Ukraine’s Luhansk Province to rest and “increase their combat capabilities” while other Russian formations continued fighting.https: //t.co/kL6JflVoLM

Prognosis
We’ve reached the same place we were in late March / early April, where neither the Ukrainians nor the Russians have the combat power to pursue large-scale operations. Some towns will change hands, but this phase of the war is a logistics race. How fast could the Russians regenerate the units that were mauled in taking Luhansk? How many “contract” soldiers can Russian recruiters wring out of Russia to join the army? Does the Russian logistics arm have the imagination and wherewithal to evade long-range rocket attacks while supporting the field army? If the Russians cannot maintain a steady flow of artillery ammunition to the firing batteries, this war is over. Russian infantry and armor have proven horribly incompetent; their advances in the past month have been behind a curtain of artillery rounds.

The Ukrainians have a similar set of problems. They need to integrate new NATO standard weaponry and equipment into their units. Supplies of Soviet standard munitions are being rapidly drawn down, and new dumps of Western munitions will have to be established and protected. Newly trained units must be introduced to combat, and those men who have been in combat for four months will need a rest. Pressure must be kept on the Russian army, so it does not have time to rest and refit. Ideally, attacks in Kherson, Donetsk, and Kharkiv will keep Russian units racing back and forth, putting out fires and preventing them from replacing men and equipment.

There is also the function of political will. Right now, neither Putin nor Ukrainian President Volodymyr Zelensky seems to have anything to talk about. None of the major European powers nor America have indicated that they will push Zelensky to seek peace a second before he wants.

Like so many wars, this one started out looking easy and quick in the planning stage but then encountered Clausewitz’s “friction.” There is no telling how much longer this one can last.