Silvercrest Asset Management Group LLC raised its position in shares of The Interpublic Group of Companies, Inc. (NYSE: IPG – Get Rating) by 2.3% in the fourth quarter, according to its most recent filing with the SEC. The firm owned 38,116 shares of the business services provider’s stock after purchasing an additional 840 shares during the quarter. Silvercrest Asset Management Group LLC’s holdings in Interpublic Group of Companies were worth $ 1,427,000 at the end of the most recent quarter.

In related news, Director Jocelyn Carter-Miller acquired 6,764 shares of the firm’s stock in a transaction that occurred on Friday, April 29th. The shares were bought at an average cost of $ 33.26 per share, for a total transaction of $ 224,970.64. Following the purchase, the director now owns 44,714 shares in the company, valued at approximately $ 1,487,187.64. The transaction was disclosed in a document filed with the Securities & Exchange Commission, which can be accessed through this hyperlink. Also, Director Dawn E. Hudson sold 18,376 shares of the business’s stock in a transaction on Monday, May 9th. The shares were sold at an average price of $ 32.45, for a total value of $ 596,301.20. Following the sale, the director now owns 32,880 shares in the company, valued at $ 1,066,956. The disclosure for this sale can be found here. Company insiders own 0.33% of the company stock.

The firm also recently declared a quarterly dividend, which will be paid on Tuesday, June 21st. Investors of record on Monday, June 6th will be issued a dividend of $ 0.29 per share. The ex-dividend date is Friday, June 3rd. This represents a $ 1.16 dividend on an annualized basis and a yield of 4.14%. Interpublic Group of Companies’s dividend payout ratio (DPR) is currently 45.31%. 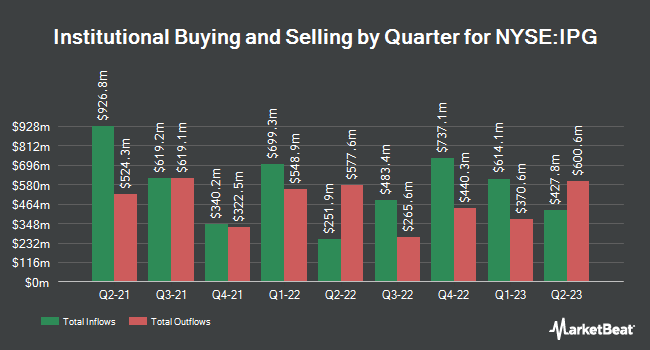