Retirement Systems of Alabama lifted its stake in shares of The Progressive Co. (NYSE:PGR – Get Rating) by 67.8% during the first quarter, according to its most recent disclosure with the Securities and Exchange Commission (SEC). The firm owned 325,329 shares of the insurance provider’s stock after acquiring an additional 131,469 shares during the quarter. Retirement Systems of Alabama owned about 0.06% of Progressive worth $37,084,000 at the end of the most recent reporting period.

Progressive (NYSE:PGR – Get Rating) last posted its earnings results on Thursday, April 14th. The insurance provider reported $1.12 earnings per share for the quarter, missing analysts’ consensus estimates of $1.24 by ($0.12). The business had revenue of $12.29 billion during the quarter, compared to the consensus estimate of $12.24 billion. Progressive had a net margin of 4.54% and a return on equity of 12.85%. Equities research analysts expect that The Progressive Co. will post 4.54 earnings per share for the current fiscal year.

Progressive announced that its board has approved a stock repurchase program on Wednesday, May 18th that allows the company to buy back 25,000,000 outstanding shares. This buyback authorization allows the insurance provider to purchase shares of its stock through open market purchases. Stock buyback programs are often an indication that the company’s board of directors believes its shares are undervalued.

The business also recently disclosed a quarterly dividend, which will be paid on Friday, July 15th. Stockholders of record on Thursday, July 7th will be given a dividend of $0.10 per share. This represents a $0.40 annualized dividend and a dividend yield of 0.34%. The ex-dividend date of this dividend is Wednesday, July 6th. Progressive’s dividend payout ratio is 10.87%. 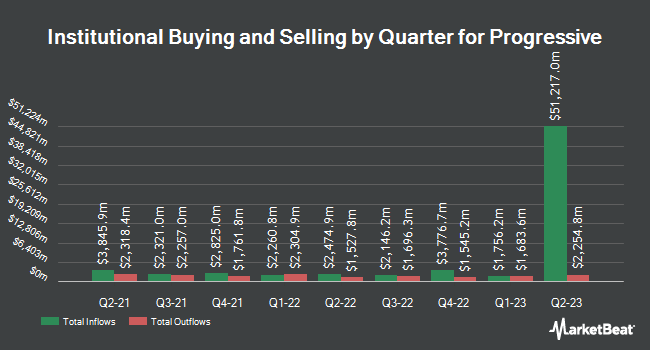